TWO YEARS LATER, THIS IS HOW THE RESTORATION OF NOTRE-DAME IS GOING ON

After the devastating fire that set the iconic Paris cathedral in flames, restoration work goes on at the cathedral.

The world watched as the church’s spire fell on 15 April 2019, after a fire destroyed the centuries-old monument. Now, two years later, the church is still undergoing a massive restoration. This Gothic architectural gem is being rebuilt with oak trees from the local forests, as 200 construction workers operate on-site every day. The goal, according to French President Emmanuel Macron, is to repair the church before the city hosts the 2024 Summer Olympics, which will begin on 26 July 2024 in Paris. But is that a realistic goal?

“It’s a delicate question,” says Michel Picaud, president of Friends of Notre-Dame de Paris, the charity raising funds to rebuild the church. “The opening of the cathedral in 2024 will not necessarily be the last step in the restoration,” he continues. “There is more work to be done. Everyone hopes to get into the cathedral by 2024, but then it will continue after that date towards full restoration.”

The first step in the reconstruction of Notre Dame’s roof and spire was the safety phase, which began in the summer of 2019 and lasted until November 2020. Scaffolding was built around the cathedral to restore the spire, a tarpaulin was installed over the vaults and the gargoyles were wrapped. The spires were reinforced and the flying buttresses were strengthened. Construction continued until the pandemic struck. There was a three-month pause in reconstruction in early 2020, but construction resumed on 8 June 2020, and workers removed more than 300 tons of burnt scaffolding surrounding the spire, which took until December 2020. 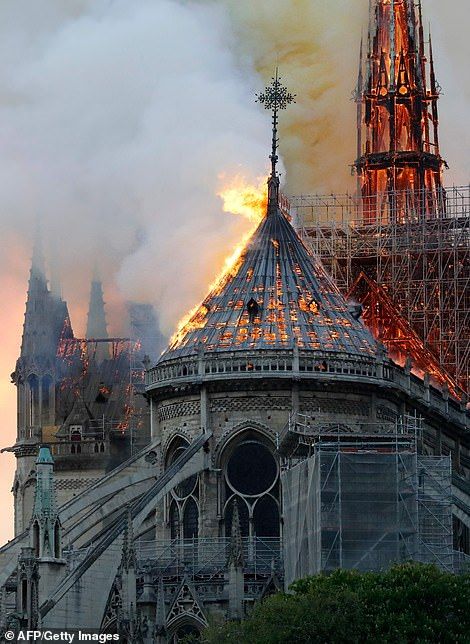 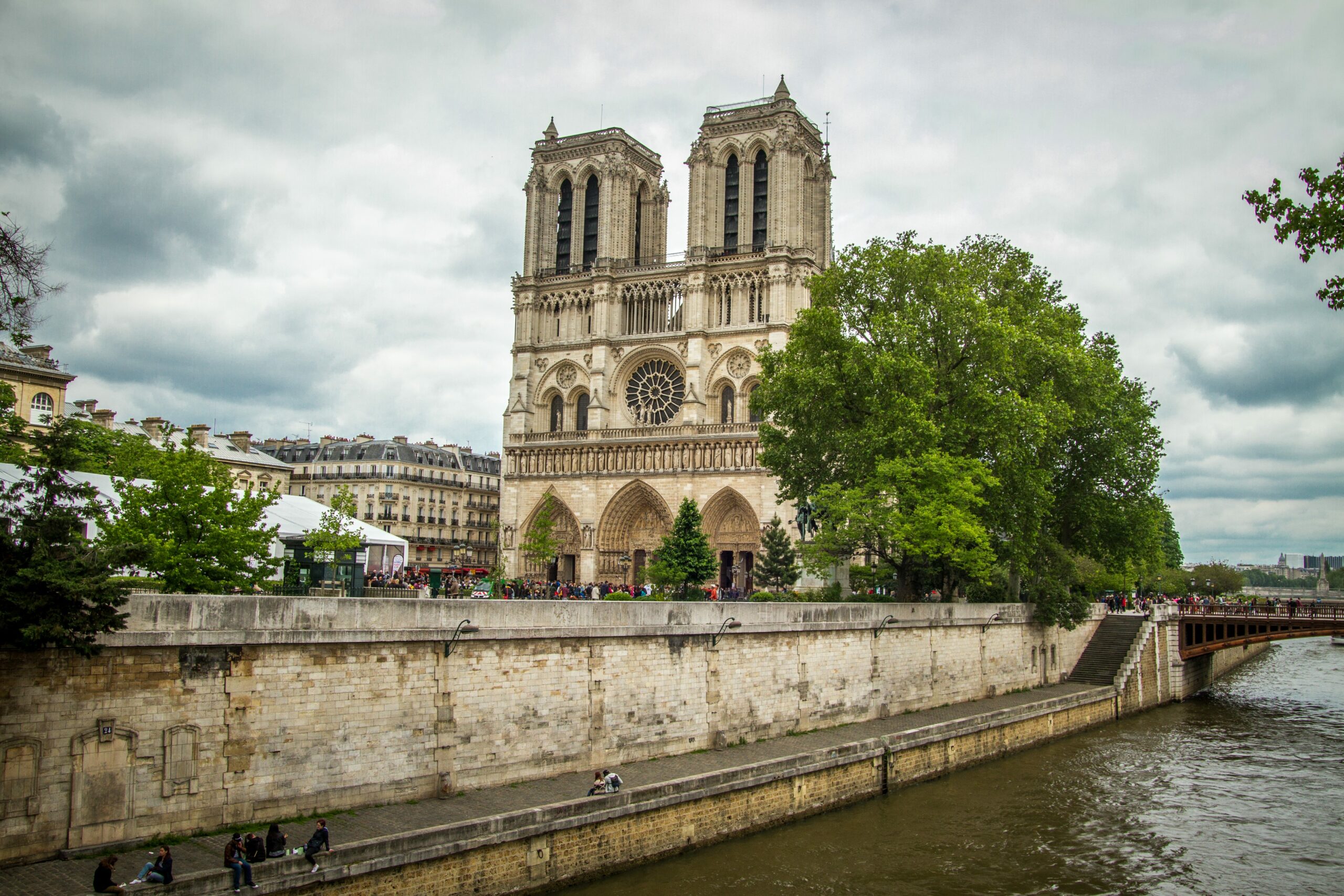 To remove the burnt scaffolding on the roof, a secondary structure of metal beams was built on three levels to help prevent the collapse of the church. Workers hung from ropes to access the heart of the scaffolding.

The latest update from Notre-Dame is that all the burnt timbers were removed. “We’ve made a lot of progress in the past month, it’s very encouraging,” says Picaud. “The last time I visited the church, I saw one of the biggest steps: installing scaffolding inside the cathedral.”

The church relies on donations through the fundraising organisation and will not have a ticketing system once it reopens (it will remain free entry). “It’s difficult, as you imagine, there’s so much to do,” says Picaud, who is planning a virtual event with the French Embassy in the United States on April 15 at 12 p.m. EST, with a presentation and update on restoration status.

Today, there is still a gap on top of the church. They are also building a replica of the church tower that was originally designed by the 19th century architect Eugène Viollet-le-Duc, made from more than 1,000 oak trees donated from public and private forests across France. The trees are cut and harvested this spring before they are exhausted and will be stored for 12 to 18 months to prepare them for the reconstruction phase, starting in autumn 2022.

The aim is to store the wood at a low moisture content (below 30%). Each tree must be long enough to fit a 65-foot long top curve to restore the roof frame (its nave and chancel). Some of the trees are more than 200 years old, according to Bertrand Munch, director general of the National Forestry Office.

It is slow progress, but the team of engineers, carpenters and construction workers remains hopeful. “The selection of these first oak trees is an important step on the road to the rebirth of the cathedral,” says Dominique Jarlier, president of the National Federation of Forest Municipalities. “It is part of a great transformation.” But with all the hard work and determination, it looks like it will be worth the wait. 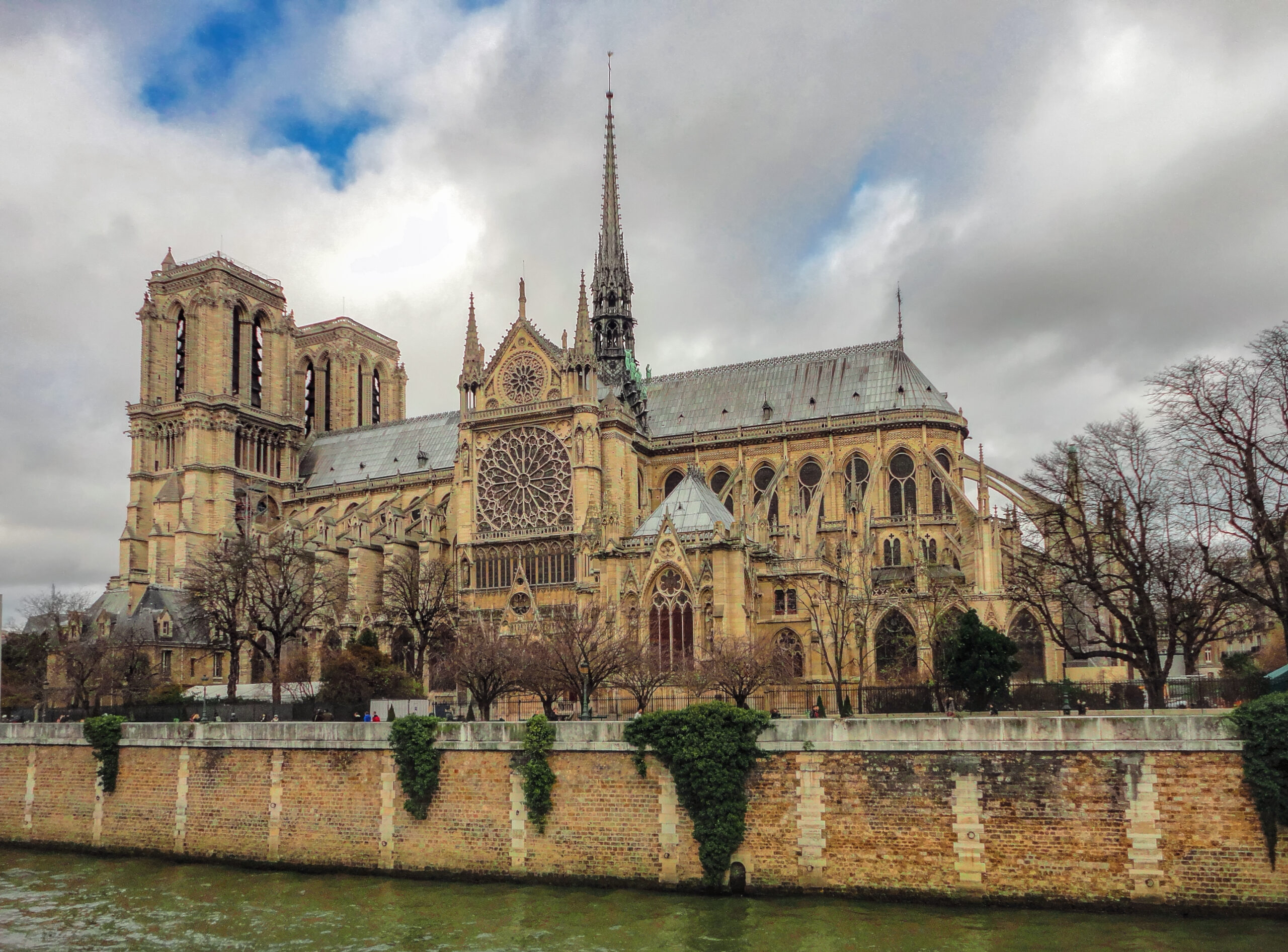